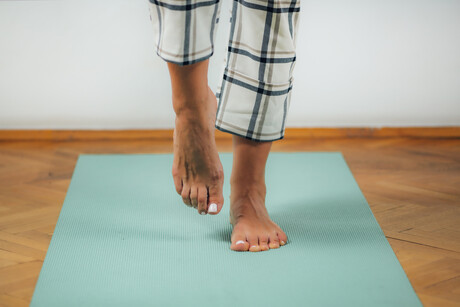 The inability to stand on one leg for 10 seconds in mid-life has been linked to a nearly doubling of the risk of death from any cause over the next 10 years, according to research published in the British Journal of Sports Medicine.

The University of Sydney study looked at whether a balance test could be a reliable indicator of the risk of death from any cause within the next ten years and as such be included in routine health checks later in life.

They drew on participants in the CLINIMEX Exercise cohort study – it was designed in 1994 to assess associations between various measures of physical fitness, exercise-related variables, and conventional cardiovascular risk factors, with ill health and death.

Weight and various measures of skinfold thickness plus waist circumference were taken. Details of medical history were also provided. Only those with a stable gait were included.

As part of the control, the participants were asked to stand on one leg for 10 seconds without any additional support. To improve the standardization of the test, participants were asked to place the front of the free foot on the back of the opposite lower leg, keeping their arms at their sides and looking straight ahead. A maximum of three attempts on both feet were allowed.

More than half (about 54%) of 71- to 75-year-olds failed to complete the test. In other words, people in this age group were more than 11 times more likely to fail the test than those who were just 20 years younger.

But the death rate among those who failed the test was significantly higher: 17.5% versus 4.5%, reflecting an absolute difference of just under 13%.

Overall, those who failed the test had poorer health: a higher proportion were obese and/or had heart disease, high blood pressure and unhealthy blood fat profiles. And type 2 diabetes was three times more common in this group: 38% versus about 13%.

After taking into account age, gender and underlying conditions, the inability to stand on one leg for 10 seconds without support was associated with an 84% increased risk of death from any cause within the next decade.

This is an observational study and as such cannot determine a cause. Since the participants were all white Brazilians, the findings may not be more broadly applicable to other ethnicities and countries, the researchers warn.

And information about potentially influential factors, including a recent history of falls, physical activity levels, diet, smoking and the use of drugs that can disrupt balance, was not available.

Nevertheless, the researchers conclude that the 10-second balance test “provides rapid and objective feedback to the patient and health professionals regarding static balance” and that the test “adds useful information about mortality risk in middle-aged and older men and women.”